I am a Social Guy and also use a lot of Social networking through out the day. Today while surfing Facebook I saw a Image by Nicola Deiana in which the Social Media was Explained in a Single Image. I was shocked and laughed a lot too and after that in Google Plus I was a Post by Alexander Howard which was of Same topic “Social Media Explained” but it was not an image by in Text . The list was bit lengthy. I want to show both the Image and the Post.

Here is the Image “Social Media Explained” by Nicola Deiana 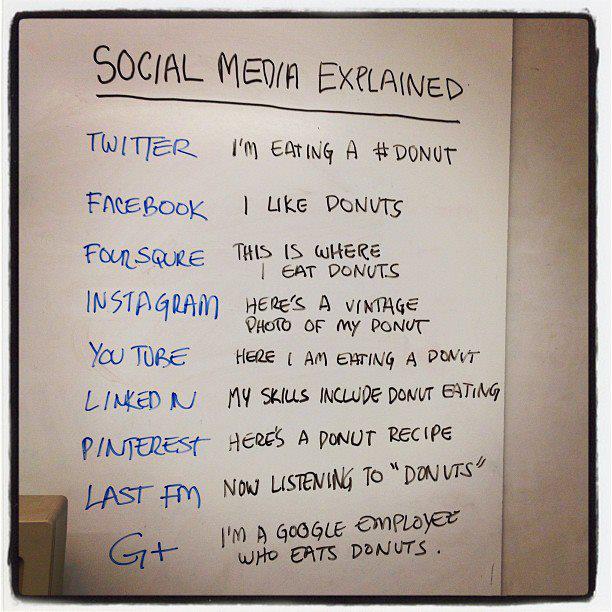 Here is the Status Update of Alexander Howard

Twitter – I’m eating a donut
Facebook – I like donuts
Foursquare – This is where I eat donuts
Instagram – Here’s a vintage photo of my donut
YouTube – Here I am eating a donut
LinkedIn – My skills include donut eating
Pinterest – Here’s a donut recipe
LastFm – Now listening to donuts
Google+ – I’m Hanging out, eating donuts
Quora – How do you eat donuts?
Yelp – While the donuts here are fresh, there are always long lines. And the cashier was surly.
MySpace – Why are you spamming my donut?
Flickr – Your donut is interesting
uStream – I’m broadcasting my donut live!
Diaspora – I prefer to eat my donut privately at home
Tumblr – I rebaked your donut
Foodspotting – I ate a delicious old fashioned donut here with fresh apple cider. #omnomnom
StumbleUpon – I found a tasty donut
Storify – I quoted you in my story about the donut revolution
Habbo – OMG u r going to <3 my donut
SecondLife – Where can I get an avatar for my donut?
Craigslist – Seeking donut, preferably glazed or old-fashioned, for dunking/eating gig.
WolframAlpha: Doughnut, Total Calories 224, Fat Calories 104, Total Fat 12 g, Cholesterol 13mg, Toral Carbs 27g
Orkut – Eu gosto de dançar e comer donuts
vKontakte – Это очень холодно пончик
Weibo/Qzone – 我們必須不害怕甜甜圈帝國主義
Wikipedia – A doughnut or donut ( /ˈdoʊnət/ or /ˈdoʊnʌt/) is a fried dough food and is popular in many countries and prepared in various forms as a sweet (or occasionally savory) snack that can be homemade or purchased in bakeries, supermarkets, food stalls, and franchised specialty outlets.