A new environment, a new way of maintenance. How to Windows 8 as an IT professional to manage?

To begin with, we are particularly curious about the overall performance of the new operating system. We can be brief. Windows 8 continues the line of Windows 7 on and enhances the performance of our test system. We start noticeably faster and smoother machine responds to commands.

The first question that the more conservative system will enable at the sight of Windows 8 is: “Where is the start menu and how do I get back to the classic view?” Unfortunately, Microsoft supports this possibility, but there are several free applications available that the start menu can bring it back. 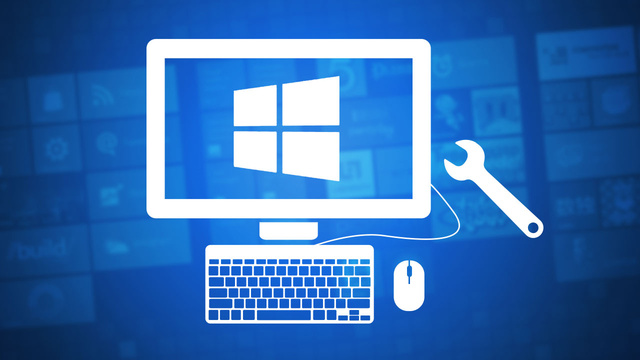 More important is the question of how many versions of Windows 8 there are and which version you need. For small business and home users is the correct answer to that question two, namely Windows 8 for home users and Windows 8 Pro for business users. The Pro version offers everything the regular version has, but complements it including BitLocker encryption, support for Group Policy, logon domains and hosting Remote Desktop.

Moreover, for larger companies the Enterprise version, which only through volume licensing to get. Windows 8 Enterprise offers the additional applications from medium-sized companies are interesting as App Locker, Windows To Go, Direct Access and Branch Cache.

In many marketing materials Microsoft calls a version of Windows 8, namely Windows RT. This version is specially for ARM processor-equipped devices. This version includes standard Microsoft Office. It is not possible for standard Windows applications to install on Windows RT, because normal applications designed to run on a x86/64-processor. RT Windows is not without hardware sold.

Within Europe, the Windows 8 versions as N-variant appearance without Windows Media Player, so as to meet the requirements of the European Commission. All versions are both 64 bit and 32 bit as well as get.

Windows 8 enables relatively modest demands on the hardware. The specifications are recommended: 1 GHz processor, 1 GB RAM (32-bit) or 2 GB RAM (64-bit) 16 GB (32-bit) or 20 GB (64-bit) space on the hard drive, and a DirectX 9 graphics card that supports WDDM 1.0. To use Windows 8 UI applications is a minimum resolution of 1024 by 768 pixels. Two applications simultaneously by using the snap feature “only with a resolution of 1,366 by 768 pixels. For Secured Boot is a UEFI BIOS and requires the use of extensive Hyper-V features a 64 bit system with SLAT capabilities and 2 GB of additional memory. 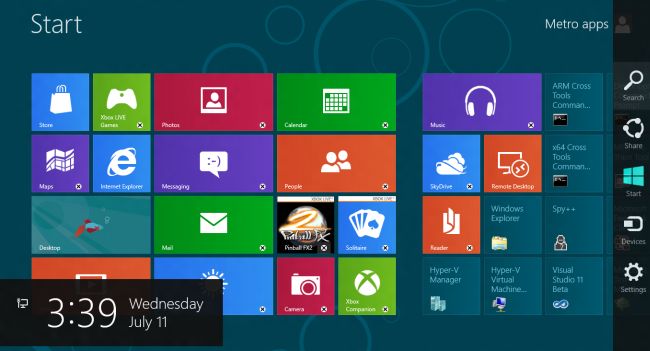 Support for older hardware for most devices like Windows 7. If a device works under this operating system, it should work in Windows 8. This applies not only to printers and scanners. Microsoft has controlling these devices completely renewed, so many models for a new driver from the manufacturer. On our test systems produced locally connected printers as network printer problems. It is therefore wise to a first transition from the manufacturer to check for the latest drivers for your printer or scanner is available. In addition, you can use the Upgrade Assistant from Microsoft also easy compatibility for other hardware and software check.

The installation of Windows 8 is faster than that of Windows 7 and takes an average of just over twenty minutes. Upgrades of machines are optimized and even machines where many files are to be upgraded within an hour. Windows 7 users may possibly over the internet upgrade to Windows 8. For use in organizations, it is possible a ready-made installer to download, which then helps to create an installation CD or a bootable system drive. If multiple identical installations must perform, can such traditionally a ‘unattended’ xml file to standard answers to questions such as the product key to give.

In the area of updates is a pleasant improvement made to Windows Update. The automatic restart after ten minutes is replaced. A machine that has updates now indicates that within a few days should be restarted. For most users, this gives enough time for a day to complete, and then at the end of the day the updates to perform, making up for lost time limited.

In the arsenal of the system we find another old friend who has undergone some much needed improvements. The Task Manager is a standard format between running applications and background tasks. Not only the load on the processor, but also the memory usage, disk access and network loads are directly displayed. With colors in a glance which applications and processes hardest on the system again. 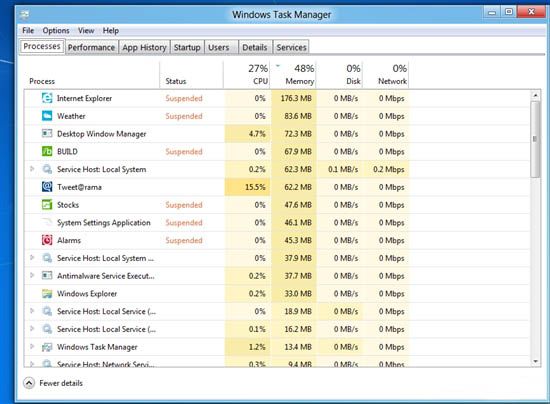 There the improvements not. We can from the task manager also a direct overview of the applications that start when Windows starts. Windows will immediately to the influence of the applications on the operation of the system. With the push of a button, we ensure that certain applications are no longer standard start.

Who longs for the old list again with PID, username and status can also be found. There is even a tab for the applications in the past have put pressure on the system. That can be a good tool to complaints on another system to solve.

Windows 8 includes more natural options that improved or added. There is a separate option in the settings of Windows 8 UI which we can restore the computer to factory settings, so we do not have much to fear if we have a computer selling or transferring to a new employee.

There is also the possibility to create a Picture Password. Would you log into Windows, then you just three preset movements on an image. This can both touch and mouse. The image passwords are easy to set up and for most users a lot easier to remember. Also copying files is more intuitive than before. If you go home for the command to 10,000 files to the server copy, then see the next day we no longer have that copy action was paused at file 10 – EG whether we also wanted to copy system file. The question will still remain, but the background does Windows just continue with the other files.

Multiple, one after the other copy jobs are entered in the same window and jointly. If we in Windows 8 three times a copy job to give some large files to copy, we see not that command a four minutes, commissioned two eighteen hours and contract three or four days. The time is now divided neatly on the assignments.

Author Bio: Syed Qasim is part time tech blogger. He has a great experience in Internet Marketing. Now a day he is working on his Technology Guest Blogging Site. He is writing on satellite communications & android apps.