For some unexplainable reason, the recent deaths of Sage Stallone, son of Hollywood actor Sylvester Stallone, SpongeBob voice actor and Oscar winner Ernest Borgnine, and Stephen Covey, famed author of the motivational book, “The Seven Habits of Highly Effective People,” which also happens to be a top-seller among businessmen of both big and small companies, got me thinking about business ideas related to death. 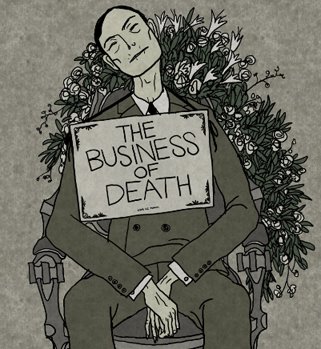 Death, as they say, is one of the few certainties in life (aside from taxes). And money matters are most often associated with demise; so it’s safe to say that there are business opportunities to be tapped that are connected with death. Usual suspects include undertaker services, coffin makers, florists, cemetery property brokers, and the like. But some pretty unconventional ones are starting to crop up these days, too.

Kerry Greville, an MA Textile Futures student from the Central Saint Martins College of Art and Design in London, started a critical project involving the extraction of certain chemical components from cremated remains to create woven textile products. The inception of her project titled “Salvage: Recycling the Dead” began with a simple research question: “Can exploration of the material potential of the body provoke debate around material value?” Greville started extracting base and precious metals like copper, iron, zinc, and magnesium from cremated human remains to create threads for her clothes.

Projects such as these aren’t new. During World War II, the Nazis had to find a way to recycle the bodies of the exterminated Jews, and they had a simple yet elegant plot of using human remains in the production of fabrics, mattresses, and other products. Weird and shocking, yes, but history would tell us that they really used to do it. Greville perhaps wanted to breathe new life into this idea. If she succeeds, however, she would have to face the controversy and the ethical implications of doing such. I, for one, wouldn’t want to wear a shirt made out of my grandparents’ remains.

Some memorial chapels also started offering e-burial services featuring live webcam broadcasts of memorial services. Clients are given an account where they can log in and get access to the site which allows them to view the webcast online. This is good especially for those people with relatives who can’t pay their final respects to their departed loved ones in person due to their physical location.

Disposing the dead (in space)

Another option in the growing catalog of posthumous business ideas is that of the space burial. This is offered for those who want to honor the dream and memory of their loved ones by launching a part of their cremated remains into the earth’s orbit, the lunar surface, or into deep space. Families of the departed are permitted to view the launch, usually at a special facility, in real time. Celestis, a popular provider of this type of service, offers space burials starting at $995. They have opened reservations for the next launch, due in October 2012.

Thinking about your next big business move? It may or may not involve the dead, but you surely need guidance in executing that big idea. Visit the RingCentral blogand read the posts under the “Business Tips and Best Practices” category to get started.