Dropbox provides secured (Two-Step Verification) Cloud server where you can add your Files and access them from any device connected to Internet. But with the Dropbox you can be far more than doing only Data Exchange.

There are number of tools and web services available using which you can accelerate your Web works.

Using Load Side Cloud you can save your Files directly to Dropbox (Cloud) from any Web. Imagine if you are using your Friends computer and you want to Download a File, then send the File directly to your Dropbox Account and later you can access that file from your Computer.

This can be done using SideCloudLoad where you have to register and associate with Side Cloud. Just Enter the link of the maximum 25MB File and choose dropbox as a service. Then click on “sideload it“. In dropbox the file will be saved in a folder named sideloadit.

In other way, you can also send file from your Harddrive as a target instead you can specify an email address. To send by mail, registration is not required.

Drop it to Me is another useful add-on which is similar to Side Load Cloud but it is not for Personal Use, rather it is used other to send you files. You can set a Password for the sender using which he can send files to you.

After Creating an account with Drop It To Me, link your Dropbox account to it. You can set a Uploader Password to it. Then you will receive a personal link such as “www.dropitto.me/your_name” . Send it to your Friend. He will open the link. Enter the password and can send file to your Dropbox account. The file size can be upto 75MB. The file will be added to a folder named as “DROPitTOme” in Dropbox.

Box My Downloads is a Similar service as Load Side Cloud where you can Download any File from Web directly to your Dropbox Account. The main advantage of Box My Downloads is that one can get 5 Free Downloads with Unlimited Size Daily. Using the Free Plan you can have 5 Downloads Everyday with one Transfer. 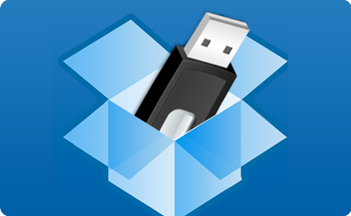 You can install Dropbox on any device you want so that the data can be easily Mobilized. But what about mobilizing the Dropbox Itself. Using Dropbox Portable AHK you can install the tool to any Pendrive or USB Stick and sync it. You can use it on any Windows Computer without Installing.

You have to Extract the Dropbox Portable AHK on the USB Stick and start the exe file. You can configure from there and then “sync and go” which will automatically close the application after the Synchronization is Complete. After that you can use run the Portable tool wherever you want.

This is helpful if you want to Organize your Dropbox Files automatically as you want. Sort My Box helps sorting your Dropbox. It helps monitoring files that arrive and sort as pre-established rules. The rules can be set according to extension name, file name etc.

You can be tricky to organize and preset it. Using wildcards such as Extensions *.doc , name contains, name pattern you can Organize it.

If you have Music files on your Dropbox account and Dropbox installed on your Computer then you can easily play the Music directly without any problem. But what if you are using other computer and dropbox is not installed there. Here you have to use another add-on known as Drop Tunes using which you can play Music directly from Dropbox using their Inbuilt Music Player.

The tool automatically recognize Audio Formats such as MP3, M4a, OGA and WAV and plays accordingly. It make a playlist of the songs and play one after another.

Viivo provides special Cloud Encryption Service using which you can encrypt your Files on Dropbox and make it more safer. It creates a Folder in Dropbox and Encrypts all the files which you will add Inside that Folder.

In the other hand, on your Laptop the files are stored in the readable format inside the Local Folder. You can use rest of the Part of Dropbox normally as Viivo uses only a Folder to Encrypt its data. You can also use Viivo Apps on iPhone and Android Devices.