Cutting the technology cable cord may seem scary at first but it enables a person to have a better experience than watching cable. It might seem like a great hassle to switch from cable viewing, but once you have gone through it you might find unexpected benefits. While a range of satellite TV packages are available from Latino Satelite, you can still get a better viewing experience online. It can be argued against, as a very small percentage of the whole viewing population comprises of cord cutters but this percentage is slowly growing and hindering the services provided by county’s satellite and cable providers. 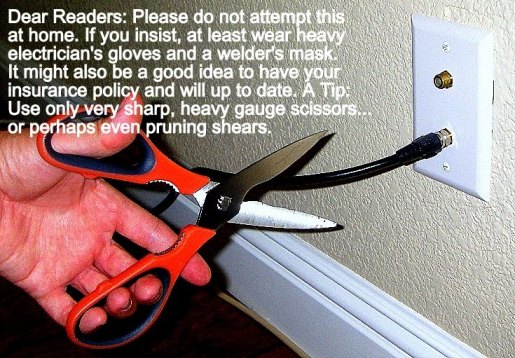 Switching may be scary

As mentioned above, the concept of cutting the cable may seem very scary at first. You have to switch from one source of entertainment to another, which would be completely new to you and may take some time getting used to. People may think that if you cut the cord you will not be able to watch your desired channels and shows. But that is not the case. The advent of different services such as Hulu and Netflix, and hardware such as Roku box, has made it very easy to access your favorite shows and channels through the internet. Other than this, there are guides that have been published to facilitate people who are going for cord cutting.

There are a few major reasons for the cord cutting movement. One of them is the monthly increase in charges of the cable subscription packages. Subscription packages keep on getting expensive. Although you get lots of additional services with these packages, they just are not required. Hence the packages are failing to provide value for money.

After noticing people’s interest towards cord cutting, cable providers slightly decreased their charges but that did not cause a major impact. There is also no big competition in the world of cable providers and satellite services. As a result, the charges have not decreased by much; instead they seem to be ever increasing. Also, due to the depreciating economic conditions, consumers have made cord cutting a means of expense cutting.

Majority of channels not watched

You pay high charges for cable packages and end up receiving hundreds of channels. No one requires hundreds of channels.While a range of satellite TV packages are available from Latino Satelite, not all of its channels will be viewed. Consumers always waste their money to some extent when subscribing for cable services. Most of the channels are either of no use to you or you don’t even know about their existence. The costs over-weigh the benefits provided by these services and it’s a failure to meet demand as it obviously is being oversupplied.
There are better alternatives (internet streaming) available that provide only what you want.  You can make a list of channels you watch regularly and the shows that you like and search them on the internet. Streaming sites of your favorite channels might contain those shows or they may be available on sites such as Netflix, Amazon and Hulu. You might even be surprised by the quality of online viewing.

Imagine that you are watching an episode of a scary television series. The episode has just reached a point where you cannot wait any further to watch its conclusion but all of a sudden you get a commercial break. It ruins all the anticipation and tension that has been built up to that point. Watching such shows on the internet provide you a commercial free experience and enhance the quality of viewing, providing you with a better viewing experience.

It is not that the cable subscribers can’t get shows without commercials. You can record your cable shows through your DVR and then just skip the commercials. But still, it can’t be compared to a 100 percent commercial free experience.

There are many things to consider. People who have subscribed for a package from a cable provider also have their internet connections from them too. There are some shows that don’t appear on online sites until much later.  While things like this are delaying the success of cutting cable movement, the number of cord cutters is slowly but surely increasing.