Drop all your plans to send unlimited SMS greetings to your dear ones this festival season. The Indian government has imposed a nationwide ban on bulk SMSes and MMSes. Till August 31, people can send only 5 SMS per day; the post-paid customers can still enjoy unlimited SMS. This will seriously affect business. 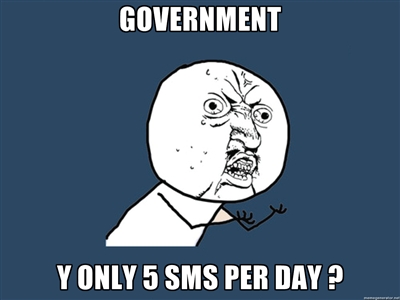 There is also a ban on sending more than 20 KB of data through mobile phones as well.
The decision was taken after reports of widespread circulation of SMSes and MMSes containing misleading information about Assam violence, after northeast-origin people based in Bangalore, Pune, and Hyderabad started fleeing back home following rumors that they would be attacked.

These threats originated from and were widely circulated through free text messages. It’s a tough decision to take at a time when almost more than half of the population is addicted to mobile phones and almost 90% youth are addicted to sms, but still may be we have to pay respect to the decision of our Government.

But dont worry you can Send SMS online , Check here to know more how –

7 Sites to Send SMS for Free without Registration in India