Recently Google as Announced about the shutting down many of his Services and Products. 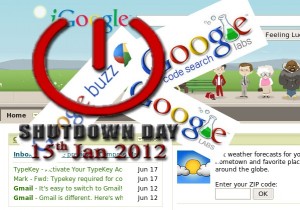 Google Bookmarks Lists is the  experimental feature for sharing bookmarks and collaborating with friends. It will be closed on December 19, 2011.


Google Friend Connect (GFC) allows webmasters to add social features to their sites by embedding a few snippets of code  It will be retired on March 1, 2012.Google recommends to use Google+ badge instead of this retiring service.


Google Gears will be stopped on December 1, 2011. Instead of Google Gear, Google is going to focus on HTML5 for implementing offline browsing capabilities.

Google Wave we will turned off completely on April 3,2012. Wave users can export the individual wave to pdf files.

Knol will work as usual until April 30, 2012, and the knol authors can download  their knols to a file and/or migrate them to WordPress.com.

Renewable Energy Cheaper than Coal (RE<C)—This initiative was developed as an effort to drive down the cost of renewable energy, with an RE<C engineering team focused on researching improvements to solar power technology. And this will be shutted down soon.

Hope Google Will Now Concentrate on his Upcoming  Projects and Developments.