Are you a fan of Rajinikanth and there is good news for all of them. Recently a new website has launched in the name of Rajinikanth which works without inetnet. You its hard to believe but its true. The Site will start working as soon as you disconnect the inetnet. The site was initiative by DesiMartini.com . 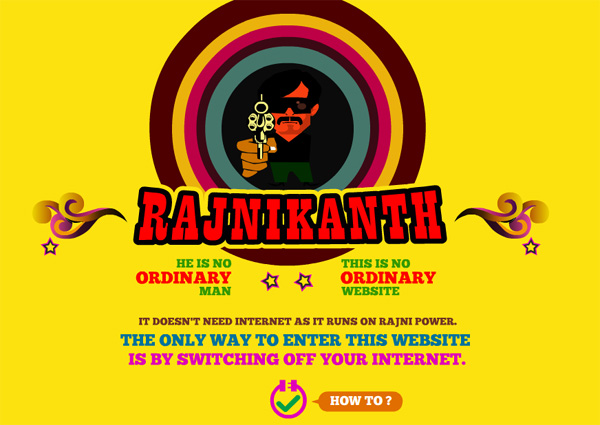 Amit Garg, Business Head, HT Internet said, “We wanted to give movie-lovers something interesting and new. Unlike an ordinary website, we are giving people something they’ve never seen before- a website that works ONLY without the internet- only a Rajini website holds the credibility to do the same!”

According to desimartini.com the website got 10,000 visits in just few hours after the launch. Users who have visited the website, have found this to be a very unique and a different concept. It’s already being talked about on Facebook and Twitter.
“The website has received a phenomenal response and has gone viral with several thousand hits and counting, along with innumerable shares and mentions across the web, especially on popular social networking sites like Facebook and Twitter,” Singh said.

“After a few iterations and testing, we cracked the code required to build the world’s first website that runs without the internet – a website that runs offline – which is as awesome and unbelievable as miracles and stunts associated or performed by Rajni himself,” he said.

Must see –  Ultimate Collection of Rajinikanth jokes by sisir naik .

The main secret of this website is that it works on Flash that need to be downloaded in order to start . The flash files are saved in Temporary folder of the Computer. Once the flash is downloaded technically the whole website is downloaded in your Computer Harddrive. By Pinging from the site it able to know weather you have connected to internet or not. Whenever it knows that you have connected it stops working and when you disconnect it automatically starts back.