Most of us are waiting for the Release of Windows 8 but as there were different versions of Windows XP , Vista and 7 such as Professional, Home Basic, Ultimate and other, what versions will windows 8 will have? Many of my friends have asked this Question and finally I got its answer. 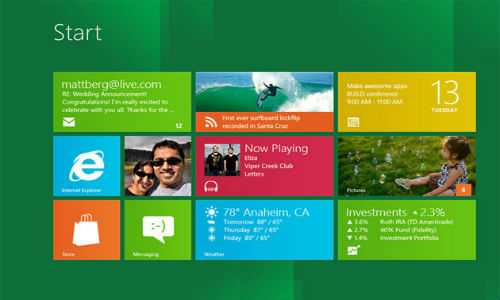 Windows 8 will have 3 Different Editions , it is announced by Microsoft.

Windows 8 for Home PCs and Laptops,

Windows 7 Pro for enthusiasts and Professionals ,

Brandon le Blanc, head of communications at Windows, announced the versions on the official Microsoft blog, and said they have “worked to make it easier for customers to know what edition will work best for them,” The Telegraph reports.

In Windows 8 you can use Touch Screen or a Keyboard n mouse and you can switch between then anytime.

Windows 8 RT will be the First Version that will be designed for the Tablets.

The Basic Version of Windows 8 will be Consumer based and will run in most of the Computers and Laptops , The Windows 8 Pro will have some extra features such as File Encryption, Virtualisation od OS and Domain Management, and the Windows RT has the RunTime Programming FrameWork which will run on those devices those are Powered by ARM based Chips such as tablets.

The below chart breaks down key features by edition (this list should not be considered an exhaustive list of features):